As a marketing specialist, I was present on February 12, at Place Bonaventure in Montreal, to offer marketing clinics and give potential solutions to the many entrepreneurs present.

Development of the name and image of the Facebook page. In addition to giving advice on gardening, this citizens' initiative made it possible to distribute fruit and vegetable plants to the residents of Saint-Jean-sur-Richelieu, free of charge! 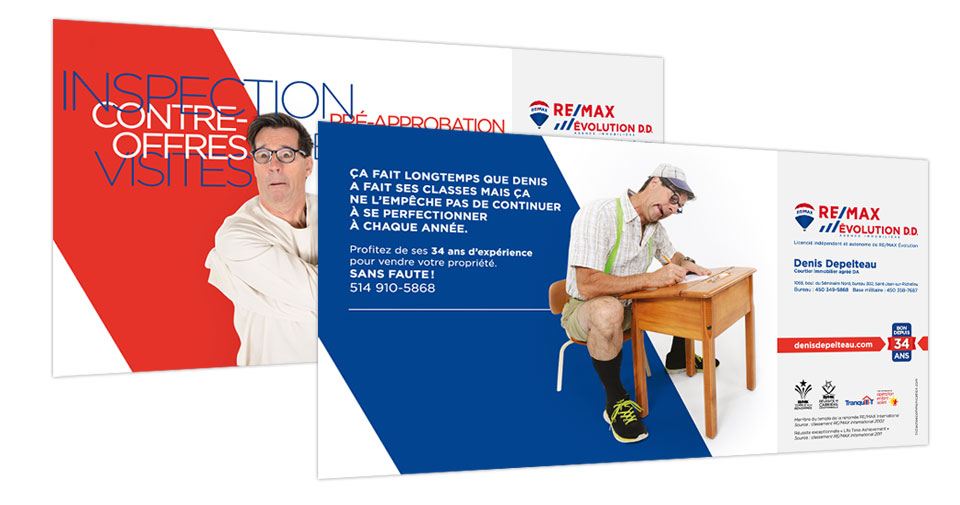 Since 2000, François Ménard's agency has designed no less than 93 original ads!

"Without the participation of my client, I could never have gone so far in the declination of this campaign, said the designer François Ménard Denis is always ready to do the right mimicry to support the texts " . If Benoit Brière has become Monsieur B by playing different characters in more than a hundred television commercials for Bell Canada, we can say that the Haut-Richelieu now has his Monsieur D!

Denis Depelteau has been in the real estate business since 1985. He is part of the Hall of Fame and has received a certificate of outstanding career success from RE / MAX International. For many years, he was also a member of the Standards of Professional Practice Committee and the Arbitration Committee of the Greater Montreal Real Estate Board.

Do not go down!

Press relations, Facebook announcement, production of a powerful video as well as announcements in the local newspaper, helped to alert the citizens on this most important issue for the future of this city.

Citizens responded to the invitation in large numbers. The day of the meeting, the boardroom was full, and organizers even had to provide a screen in the lobby of the City Hall to broadcast the session. It was never seen before! 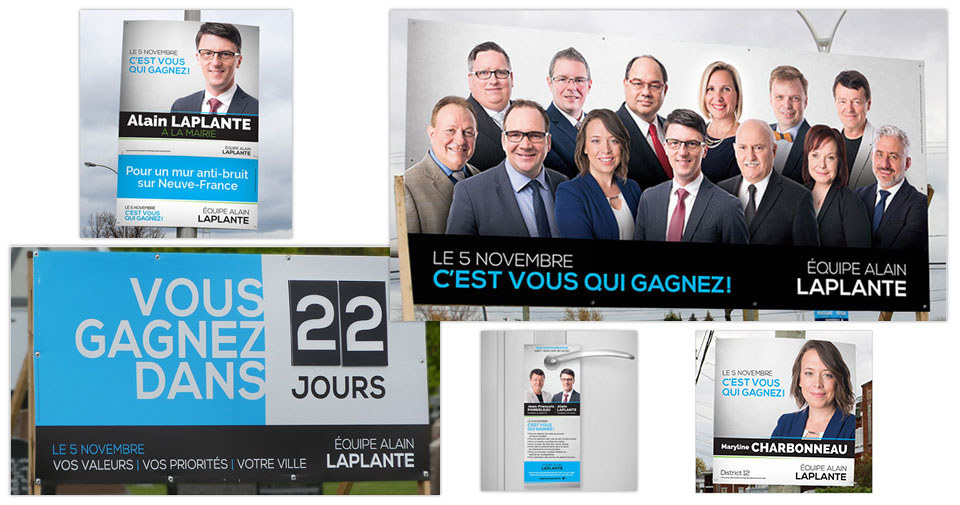 In anticipation of the 2017 municipal elections in Saint-Jean-sur-Richelieu, Team Alain Laplante mandated TIC TAC TOE Communication to design its advertising campaign and to assist in its communications strategies. By its slogan, this campaign directly appealed to voters. In addition, signs installed at strategic points in the city, reminded them of the number of days remaining before going to vote. The day after the election, stickers were affixed to thank the voters: Thank you, you won!

This campaign was preceded by an election campaign to announce meetings with citizens. The Team wants to know their concerns on different issues.

Remember that TIC TAC TOE Communication had also made the first election campaign of Team Alain Laplante in the 2013 municipal elections.

If there was an election campaign that stood out and made a lot of people talk about it in Saint-Jean-sur-Richelieu in 2013 and even across the province, it's the campaign of the candidate for the Mayor Alain Laplante and his team.

Indeed, the comments on the various Facebook pages were read by hundreds! In addition to of course the page of the Team and the personal one of Alain Laplante, were added those of the new program In mode Salvail with channel V, the Clique du Plateau, Saint-Jean-sur-Richelieu Infos, Hello Hello and even our national Infoman, Jean-René Dufort spoke about it! The opponents too ...

It's a first election campaign for its designer François Ménard. The challenge was very stimulating especially when we were living with cynicism about the elected officials.

"We are used to seeing the same type of election campaign after election Alain and his team were ready from the start to want to do otherwise. Alain embodies the change, his image had to be different, tailored-made for him, I could not have done it for any other. The various ads are used as an excuse to talk about the ideas and values of Team Alain Laplante ", say François Ménard, strategist and designer.

A native and resident of Saint-Jean-sur-Richelieu, it was during the 1995 referendum that the career of the publicist François Ménard was launched. At the time, as Advertising and Promotion Advisor to the Quebec Federation of Egg Producers, he had used the news to touch the imagination of Quebecers. The hens have their own referendum! They proclaimed loudly YES for eggs at breakfast and NO for breakfast without eggs! This campaign had won, among others, the Rooster of the public, award given by the Advertising Club of Montreal and 14 other awards and nominations, at the provincial, national and international levels.

In 1999, he founded the advertising agency TIC TAC TOE Communication.

Television, radio, newspaper, posters, flyers, planes and blimps! All of these methods are good for saying that we have a product to sell; this is fantastic, even more fantastic than that other product which resembles it but which is not the same. Etc. etc.

Faced with all these messages, each trying to outrival the other, we can certainly ask ourselves: is it worth our while to advertise or do we just do it because everyone else is doing it? To ask the question is to answer it… Because we live in a society where media is ever more present, we no longer have a choice: if a product does not talk; does not express itself, it quite simply does not exist. To be or not to be, that is the question!

Before buying a product, people buy the advertisement!

Advertising is an intrusion. People do not ask to see it, they are bombarded with it. This is why it must not only...

With François, it's not complicated!

It's always nice to work with you.

My new logo is above my expectations !

I really like my slogan as well as my new pamphlet.

Military Media – Get your ad in! 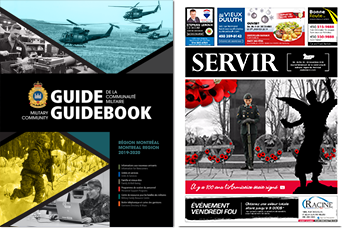